Posted on October 27, 2015 by twicethekisses

(I began writing this post on September 23, but only now, a month later, can sit down and complete it.) 365 days. 1 Entire year. The length of time its been since Doug was so brutally and tragically taken from us. By “us” I mean every single person that knew and loved him. The last time we heard his voice and his laughter. So many firsts have happened in the past 365 days. Several I have blogged about. Many I have not. I interviewed with 2 news stations covering the anniversary of his death. These interviews were far harder than the ones I did initially following his death. Because so much has happened this past year. So much that Doug should have been a part of. But I have said from day 1 I do these interviews not to see myself on tv, but to honor the memory of 2 men who were taken far too soon, Doug and Brian. So much in the beginning was spoken of the murderer and his picture plastered all over the television, that when Doug and Brian’s names were publicly released I felt I couldn’t say no to the interviews, and I appreciated the media turning the focus on the 2 victims, not the cowardly murderer. Maybe one day this will change in the media, where only the victims are focused on.

We have been helped the past 365 days by neighbors, coaches, friends, North Valley Church, family, strangers, Doug’s coworkers at UPS, I could go on, and for those people and I eternally grateful. A few individuals at UPS set up a memorial for Doug and Brian at their building. I truly did not think I could ever go near that building again, but when I found out the memorial was outside, Doug’s Dad and I took the boys to see it…probably for the 1 and only time unless the boys ask to see it again when they are older. We are blessed that the memorial will be there for as long as the UPS building will be there.

I want to attempt a list of what Doug was robbed of this past 365 days:

1. the boys’ 1st season of basketball

2. almost 3 seasons of baseball without him on the field coaching (and this last season Braddock and Sawyer really improved and were rock stars in my book on the baseball field)

4. The boys’ attended their 1st Auburn game (Doug literally could not wait to take them to their 1st, but he was not there in person for this 1st)

6. Our 1st family vacation without him (to the beach)

8. First day of Kindergarten for the boys

9. loss of 1st tooth for Sawyer

11. Heartwalk 2015-Doug’s baby at work-he helped link his UPS facility and the American Heart Association for fundraising for the Heartwalk. This year over 90 walkers participated in honor of Doug and Brian and wore t-shirts made in memory of them for this event.

12. A day I know I blogged about-the hardest day so far: June 21, the boys’ 1st Father’s Day without Doug and what would have also been our 12th wedding anniversary.

So that’s just a sample of the 1st 365 days without Doug. Some say it gets “easier” with time. I find this insanely hard to believe. How would it ever get easier without my soulmate? My partner in life? The father to our children? The man I have spent more than half my life with? I wake up everyday and for a split second think it isn’t real. That there is no way we have a life without Doug in it.

The boys saw me crying the other day and asked why and I told them I just want them to remember Daddy. Sawyer replied “if we don’t, we will just look at his pictures”. And my heart broke even more. To know that because of an act driven by Satan himself these 2 innocent boys will probably know their Daddy only through pictures and what we tell them.

So I will end with just love and appreciate all that you have because it can be gone in the blink of an eye. 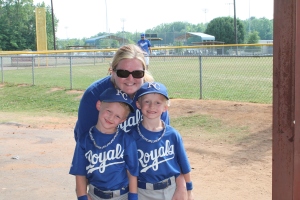