Posted on March 6, 2014 by twicethekisses

So I am a total failure as of late with my blog posting. As I have said before, this is a version of a “baby book” for the boys and I periodically print the posts and put in a binder for them (also behind on doing that task). I think living life with my family and seemingly going nonstop has ironically pulled me from documenting these memories. Here it is March and I never posted for the boys 4th birthday on November 24. I did, in fact, start the post with the title above, and that is as far as I got.

It is so hard to believe we have four year olds now. We really are at such a fun age now. It is so funny that brothers 1 minute apart can be so different in some aspects. Sawyer is becoming more girl obsessed (he thinks his girlfriend is a friend’s much older daughter, literally goes giddy when he talks about her), he LOVES to dance, still enjoys being able to play by himself from time to time, is still an athlete in every sense, asks to play baseball year ’round (which I feel like we already do ha), loves to fish and loves superheros. Braddock, aptly nicknamed “dramatic Braddock” by his loving parents, loves being the center of attention and being able to make people laugh. Like it is his daily mission. He prefers to play with others as to playing by himself, and though he has never said he dislikes sports, he has a true passion for being a superhero, computers and video games. He loves for his mind to be challenged for sure. Both our boys are perfect in every way and I am stoked to see how much they change before they turn 5. It is bound to happen. They love each other so much (though fighting and wrestling is common practice in our house), but are far less dependent on each other than even a year ago. 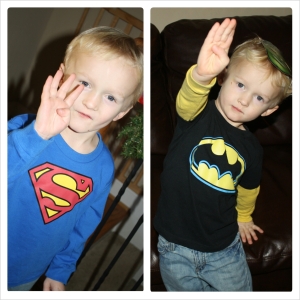