Saturday was the boys’ 2nd teeball game.  It went so much better than the 1st!  Doug gave up part of his coaching duties (still coaches when we bat) because he hated yelling at the kids all the time (and thats what it takes to get 3 and 4 year olds to coordinate in a baseball game at times, especially those like my boys who are so new to the game).  He enjoys being able to watch from the sidelines some.  He said he was missing so much of our boys playing for worrying about 10 other players.   Our boys played the best they have played yet and I think they both scored.  Once in mid-run to second base Braddock’s helmet came off and he hesitated.  I just knew it was over for him.  He is my perfectionist and loves everything in its proper place.  But he listened to our 1st base coach and kept on running.  When he did make it to home plate and scored he just stood there.  Not sure if it was to bask in his glory or because he had never been home before and every other plate he is supposed to stop at.  He also had a small meltdown when playing in the outfield and came running to the dugout crying for me.  It took me a minute to get to him (we have had a crowd of people there the 1st 2 games) and Coaches’ wife was handling it…his belt had come loose from his pants belt loop…again, Mommy’s perfectionist.  We lost this game too but it was a close game and it is so entertaining to watch them play (also this game the other teams’ parents were less uptight and weren’t screaming in my kids’ faces for their player to tag my kid out…these parents actually helped OUR team out a few times…love it).

LOVE THIS picture.  Braddock is about to bat Sawyer home from 3rd base (both boys in pic):

Sawyer running to Coach Daddy at 2nd base: 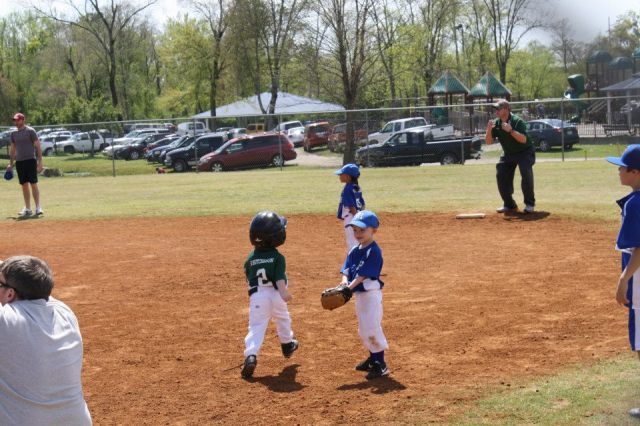 Another pic I love.  Braddock coaching Sawyer at bat from the dugout.  He kept screaming “hit it hard Sawyer and run to 1st base!”:

The boys saw the Mickey Mouse bounce house from their field and begged to bounce in it throughout their game, so they got rewarded after their game:

Our best attempt at a family photo at the park thus far: