Posted on January 27, 2013 by twicethekisses

It feels like Christmas was an eternity ago…so much has happened since then, but that is for another post, or not, depending on time and my memory. I am hoping I don’t forget any important details for this Christmas post.

Sunday we did our 2nd annual dinner at Konomi Japanese restaurant with the Hutcheson family, this year included Miss Adlee (her 1st Christmas). The boys enjoyed it even more this year, and were sad when the chef did not throw them a piece a shrimp to catch in their mouths. Thankfully Daddy saved the day and threw them chicken to attempt to catch. Not necessarily the best thing to learn at a restaurant, but it was funny, none-the-less.
Monday night (Christmas Eve) Doug got home from work and we went straight to Uncle Derek and Aunt Mandi’s house for good finger foods, desserts, and opening of gifts. Then we came home and put B and S in their Christmas pjs and off to bed they went, with the knowledge that Santa would soon be visiting. Seriously, this was such an exciting Christmas since they understand the concept now. I was worried how they would sleep on Christmas Eve because they had been sick so much and had not slept through the night for at least 2 weeks prior, but they were so tired from all the fun that they slept like angels that night.
Thankfully Santa was better prepared this year as far as toy assembly and organization (this was thanks to Doug’s parents for keeping the boys Saturday night so Doug and I could attend our church candlelight service, have a nice dinner out, and then come home and assemble into the wee hours of the morning).
It took me awhile to fall asleep on Christmas Eve because I kept imagining the boys’ reactions to see that Santa had come and Toys R Us had exploded in our living room. I woke up before everyone on Christmas morning, just waiting to hear a sound coming from their room. About 30 minutes later the boys began to rustle. Doug and I jumped up, gathered the video camera and regular camera, and plotted how we were going to tell them that Santa came…yup, we were giddy.
Until…
Our announcement that Santa had come was taken the.wrong.way. Immediately Saw collapsed in his room in a fit of tears because he had missed seeing Santa Claus. He had no concern as to what goodies Santa may have left for him. When they walked out of their room Braddock noticed the toys and shyly went for them. Saw, was a different story. He just so happened to RUN in the opposite direction of all things fun and threw himself on the floor in a typical toddler tantrum, all while Doug was videoing, trying to get the perfect reaction that we both imagined…the months of planning for the perfect gifts, the standing in line in Black Friday crowds, the late night “date night” sweating while getting the toys together, all for this moment, this amazingly horrible reaction.
Thankfully Braddock ignored Saw and began playing with each toy…a minute or so later Saw realized what he was missing…then we got the delayed reaction we were hoping for…tearing into everything wanting to play with it all…at once. Braddock was very concerned that Santa’s milk and cookies were gone, I love my little worrier, so much like his Mommy.
In such excitement Santa forgot he had a closet full of stuff to put out. So while the boys were playing with their toys, those gifts were put out, with Mommy and Daddy getting credit for them.
I do love the magic that comes along with Christmas, but now know that gifts should not be such a focus in the coming years, as the boys will learn the true meaning of Christmas.

Leaving our cookies, oreo balls, and milk for Santa:

The 1st, not-so-perfect reaction to Santa coming (Saw running in the opposite direction in a pout):

Checking it all out:

From Mommy and Daddy: 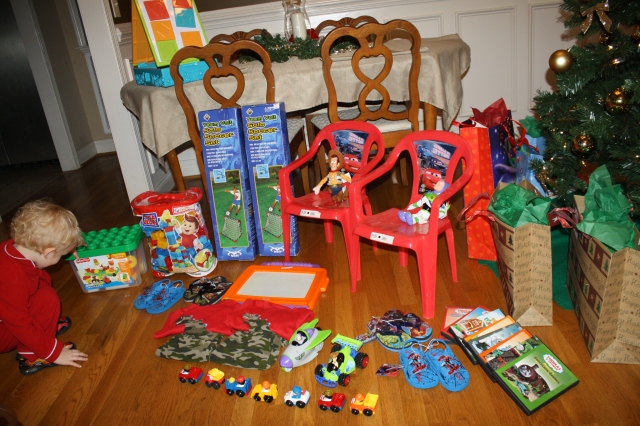 Trying out the 4 wheelers:

Typical…daredevil Saw doing stunts and B crying b/c he isn’t in control: 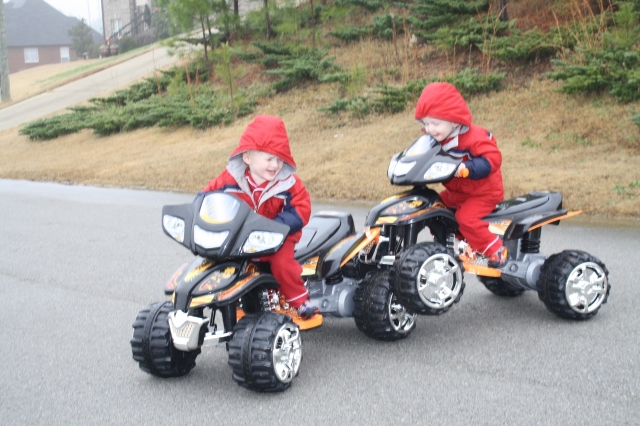 He is a natural: 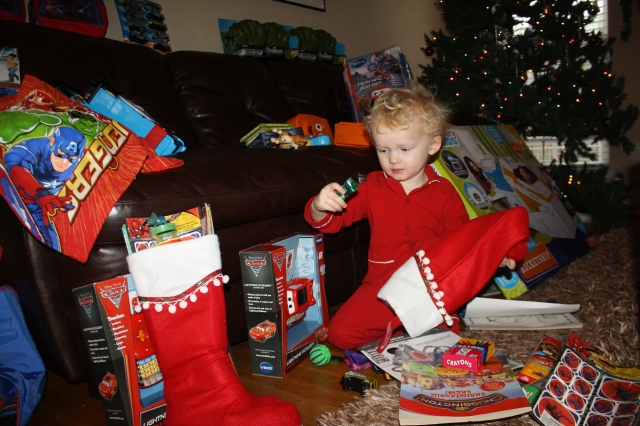 Granddaddy reading to the boys (with Aunt Tracee’s glasses on): 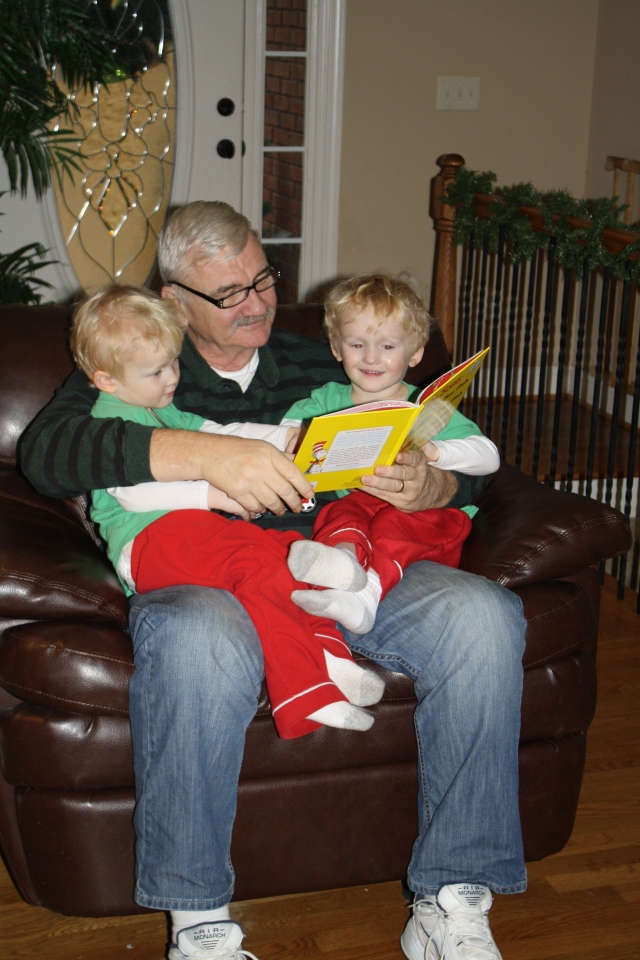 enjoying their easel from Grandmama:

boys before leaving for their school Christmas party (which they ended up missing, long story):