Posted on December 4, 2012 by twicethekisses

On November 7, Braddock had tubes inserted in his ears and his adenoids removed. I have said it before, though thousands of kids have had this done successfully, it is completely different when it is your own child. Especially a child that you have “fought for” and has had to be a fighter for himself. Doug’s parents kept Sawyer the night before since we had to be at Children’s at 5:30. I was so worried how my baby would do not being able to eat or drink anything, but he was a trooper. They ended up operating at 7:45. The procedure lasted no time. There was question as to if his adenoids were going to need to be removed, but the doctor said they were inflamed so had to come out. He also said both ears had lots of infection in them. I pray this helps my Braddock feel better. Though 3 days post-op he had yet another ear infection (as did Sawyer).

Trying on gloves and riding in a wagon while waiting, choosing between Iron Man and Hulk for his prize, on the way home Hulk fighting Mickey: 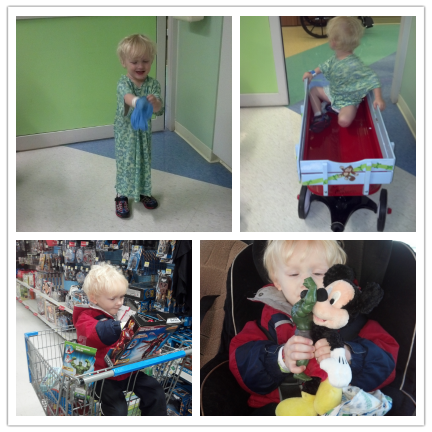