After I got off work Saturday, we took the boys to a local park to play, as it was a pretty warm day and they needed to be outside.  On the toddler playground we met a 5 year old unsupervised wanna-be bully.  Of course the Momma Bear in me took charge.  I warned Doug up front that I would correct this unsupervised child if needed.  He kept acting like he was going to punch my children, and again, no parent in sight.  My boys would walk across the swinging bridge, and he would run across it hoping to make them fall.  Luckily for him, my boys rock at balancing.  In the end, the 3 boys became playmates.  They went to the big kid playground and climbed the “mountain” numerous times to slide down the VERY tall and steep big kid slides.  I am terrible and did not take one picture with my cellphone (I know, it’s shocking).

Sunday we took the boys for a redeeming trip to the Birmingham Zoo.  In case you didn’t know, we had a complete FAIL of a Zoo trip in November for the boys’ birthday.  We left the strollers in the car and they had many fits and meltdowns when we tried to tell them where to walk.  They are such independent 2 year olds.  No question in my mind what Terrible Twos means.  This time we went at an earlier time, while most people were in church or recovering from their St. Patty’s Day hangovers, and it was so much better.  It was also gorgeous and warm with a breeze as early as we went.  We also took the double stroller, which was a FANtasic idea.  Sure, some exhibits they could not see, but they still had a blast.  We did not buy train tickets in advance like we did last time, and we again ended up not riding it, so that was a win-win.  We did ride the carousel this time, and were able to purchase tickets at the carousel, which the boys seemed enthusiastic about doing, until the ride started and the fake animals began moving.  Smiles turned into frowns rather quickly.  So I ended up holding Sawyer most of the ride in 1 arm and the other arm around Braddock on the immobile Giraffe.

Watching the elephant (a Bammer pointed out that an Auburn fan (Doug) was looking at the elephant, guess he didn’t stop and see the gorgeous tiger): 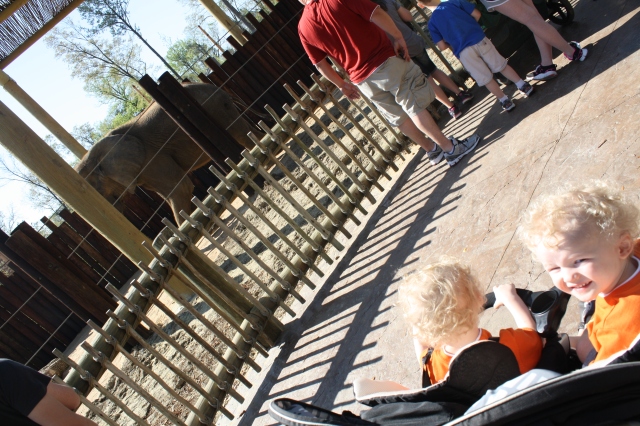 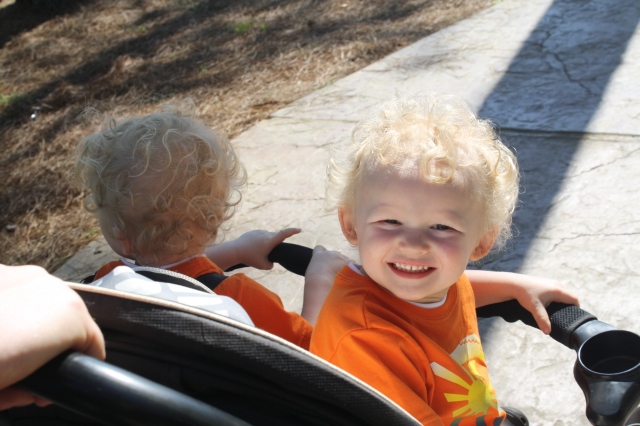 Looking at the mean ol alligator:

he sure is ugly (Doug said he has been watching Swamp People and could “handle” him):

Watching the monkeys (love the relection): 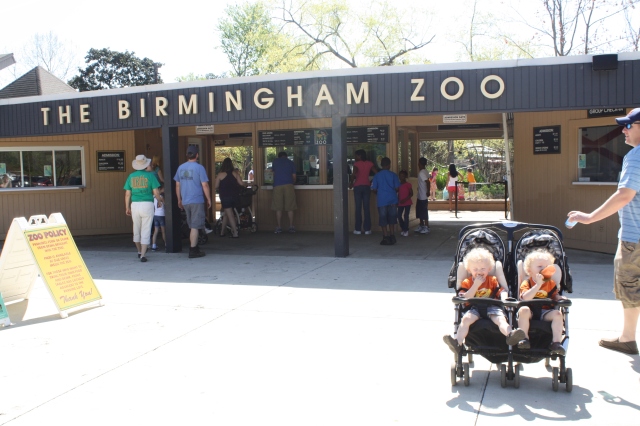 On the way home (B passed out for a power nap):