A Date Which Will Live In Infamy

Posted on February 3, 2012 by twicethekisses

Ok, maybe the title is a slight exaggeration of how completely no fun yesterday was.  I will start with my job.  I am completely in love with my job (another small exaggeration).  I love what I do and usually never dread coming into work most days, which is not something everyone can say.  Recently I have taken on extra tasks, including training 2 brand new inpatient coders, and to say I can be stressed at times is a tad bit of an understatement.  There just doesn’t seem to be enough hours in a day, and to know that this week is a 7 day work week isn’t helping any.

So after a stressful day at work, I drove to Alabaster to run an errand, which is 30 minutes in the opposite direction of home.  Doug called saying that he was getting off early and that he would just pick up the boys for me.  Here is what I am told happens next:

Doug has a flat tire in his parents’ driveway, which he begins to change outside.  The boys see that Daddy is there and begin to go wild.  They run into each other, with the end result being Braddock falling head-first into the doorway/wall, which had a point to it.  Doug hurriedly finished changing his flat tire and ran Braddock up to the pediatrician 2 miles away.  I met them there shortly after.

2 hours later and many tears later Braddock had 4 stitches in his forehead.  His first stitches.  It was a pitiful site to see.  He now goes back to see the dr in a week (which we already had an appointment for to evaluate his left ear).   We had a photo shoot scheduled for tomorrow which we have had to postpone.  I just pray he stays pain free and heals quickly.  Daddy is also hoping for minimal scaring (as it would be a brutal scar right in the middle of his forehead).

It took me 30 years to obtain my first stitches, but with 2 boys, we knew the inevitable would happen much sooner…

Being treated with cookies while waiting on the stitches:

A close-up, bless his heart:

4 stitches, many tears, and 2 bites of a Dairy Queen blizzard later, and he passed out: 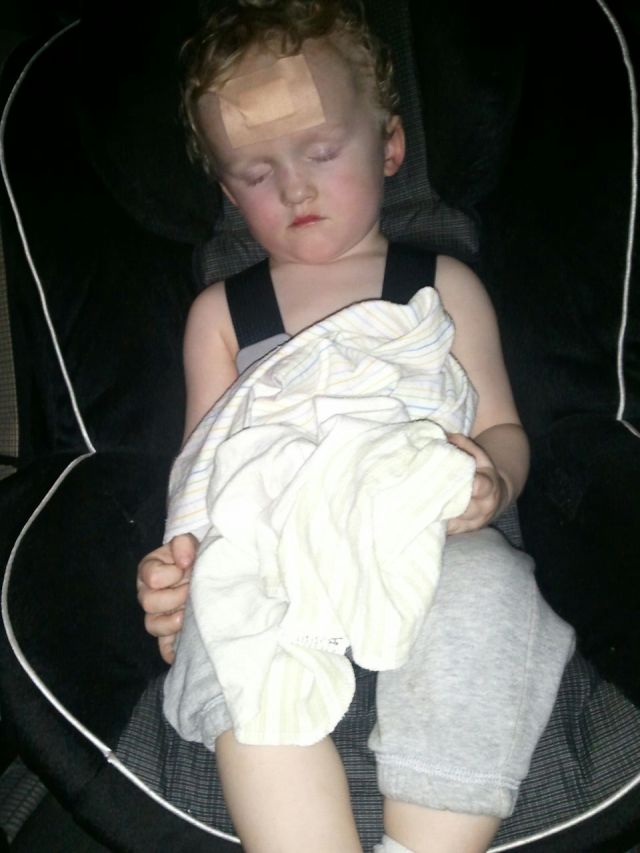