Can You Hear Me Now?

Posted on January 27, 2012 by twicethekisses

Yesterday the boys had their hearing screenings at Children’s.  It was a nasty rainy day to get them out, but the appointment had been made for months, so GiGi met me there with the boys.  They were leary then excited then comfortable to be in a new place.  I swear, at times I think man-on-man defense is not enough.  That a 3rd person would be required to chase after the boys.

I must say, I was so very proud at how my boys did with the testing itself.  The audiologist was ready with all kinds of entertaining toys such as an etch a sketch type toy, which we must now buy one of b/c Braddock loved it.  Some of the tests required concentration and the boys did so well.  One was their earphones would make a noise, and when they heard the noise they were to put a colored ring on the stick.  Braddock instantly picked up.  He patiently waited to hear the noise before continuing to play with the cool rings.  It brought tears to my eyes.  Don’t judge;)  I just had no idea they were capable of such concentration yet.  A few times he wanted to get ahead of the game and would rest his head on the table in a pouting way.  It was precious.  Sawyer picked up as well on the games, and they both aced the pointing to objects test.

The verdict:  Sawyer has perfect hearing, and Braddock is having issues with his left ear, which did not pass all the testing.  I now have to take him to his pediatrician to see if it’s just fluid in his ears that can be treated with antibiotics and then bring him back to Children’s in 6 weeks.  I am confident it is not permanant hearing loss.

The audiologist commented on how smart the boys were to pick up on the games at 2 years old.  She said their motor skills are great, which means that is not the cause of not speaking more often.  They should be speaking many 2 word sentences and the main one I hear is from Sawyer “No, Mine”…which is fitting.  The audiologist also agreed that not being in daycare has hindered their speech, not ever having to express a want or a need to anyone.

I am also going to inquire about having a speech therapist come to our home and work with the boys, pending insurance approval.

I have no doubt in my mind the boys will eventually be talking up a storm.  And they do now, its just not proper English that they speak.  I would be worried if they were complete mutes and had no desire to talk.  Bless their hearts, they try, but Mommy doesn’t understand Twin Talk.

Sawyer listening for the sound (I didn’t take any pics with Braddock b/c he went 1st and I wasnt sure what to expect and if cameras were allowed): 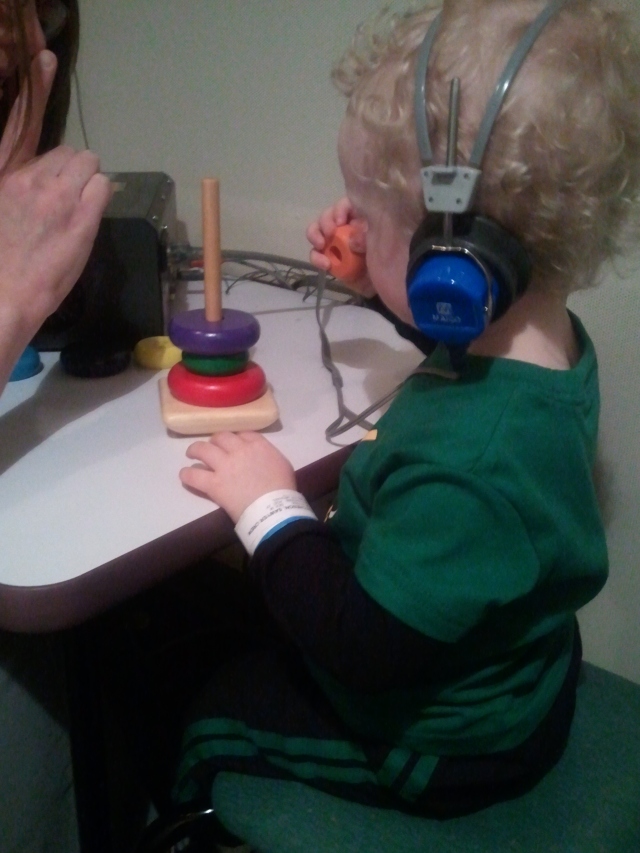